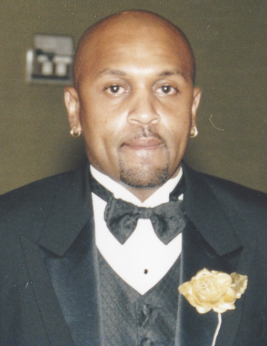 Brother Clyde Jermane Enoch was born on March 18, 1966, in Cincinnati, Ohio, to Evangelist Barbra J. Enoch Brown. Don V. Coleman was his Godfather until his passing in 2006. Clyde attended St. Luke Primitive Baptist Church, under the late Rev John Cooke. He was baptized in the name of Jesus Christ for the remission of sins by Elder Lavelton Daniels and his brother, Minister Jermane Enoch.

Clyde volunteered in the food ministry at Greater Emmanuel Apostolic Church alongside his mother, providing food for families, and always eager to cook and make people happy, with his smile and laughter. His faith in God was shown by his love for other people. Clyde’s favorite scripture was Psalm 30:5,

“For His anger is but for a moment, His favor is for life; Weeping may endure for a night, But joy comes in the morning.” He was gifted and skilled with his hands. He could fix anything and enjoyed painting and doing things around the house.

Clyde married Shyra (Cross) on February 14, 1991. They were blessed with the birth of his first son, Jaylin Amar Enoch on May 1, 1992. Clyde and Belinda Johnson were later blessed with his younger son, Clyde Jermane (Ruchie) Johnson on November 13, 1995.

Clyde found a love for sports, such as baseball and football at North College Hill Junior High School. He also enjoyed boxing. Clyde was a grill master, and notorious for his supreme cooking ability. Clyde was easy going, and believed in enjoying life to the fullest, going with the flow, and moving at his own pace. He was mild-mannered and never in a rush. Clyde was the life of the party, extremely social and made many friends along the way.

Plant a tree in memory of Clyde Jermane Enoch

I'm devasted to hear about Clyde.  He was a great guy.  I grew up with him in West College Hill.  Rest in heaven my friend, it was good seeing you last year.  Marchelle Ruff

A Memorial Tree was planted for Clyde Jermane Enoch

Plant a tree in memory of Clyde Jermane Enoch