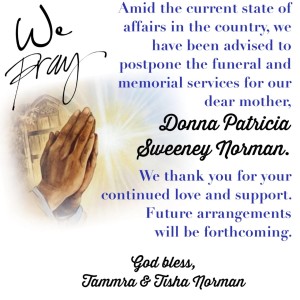 Donna Patricia Sweeney Norman, affectionally known as “Patti” was born on October 6, 1946 to the late Mr. John and Catherine McAdoo Sweeney. She departed from this life on Wednesday, March 4, 2020.

She accepted Christ at an early age at 1st Baptist Church Walnut Hills in Cincinnati, Ohio. She graduated from Withrow High School in 1964, Central State University in 1968, and married Clem Benjamin Norman (Cleveland, Ohio) in 1968.

Patti moved to Cleveland in 1968 and began teaching in Cleveland Public Schools. She soon joined The Olivet Institutional Baptist Church, where she sang in the “Voices of Olivet” Choir and was a featured soloist on several occasions.  In 1983, Patti was initiated into Alpha Kappa Alpha Sorority, Inc., Lambda Phi Omega Chapter, marking 37 years as a member.  That same year, Pat earned a Master's degree in Education from the University of Cincinnati. Her career as a master educator span over 42 years, as a classroom teacher and as an esteemed reading specialist, touching the lives of thousands upon thousands of young minds.

Upon retirement and relocation back to her hometown of Cincinnati, Patti enjoyed frequent travel to see her daughters and granddaughter, substitute teaching, attending sorority meetings, social luncheons, church events, dinner dances, and monthly lunch outings with fellow retirees, the Withrow Tigerettes.  Patti was committed to weekly exercise classes, enjoyed shopping, frequent family gatherings, custom decorating, and taking part as a featured soprano in a plethora of highly-regarded choral performances. Patti had a contagious smile and never entered a room that she didn’t light up with her personality, class, style, and laughter. She was oh-so-stylish, a hard worker, selfless, and extremely devoted to her family and friends.

She was preceded in death by: her husband, Rev. Clem Benjamin Norman, and her son, Torin Champion Norman.

Correspondences can be mailed to: